She sat down at the door with a thump. Completely unconscious of where she was. If answered honestly, she would not recognise where she was, how she ended up there. I guess God is yet not the cruellest. Or may be her subconscious led her to his door. How much can a person really speculate about another person’s behaviour?
Everyday drama must have pushed her to relinquish the control. The control was not helping in any way. She had been learning so much in so little time. Coping mostly. Loss of her mother, father shagging her childhood nanny and eventually forgetting to call his only daughter. They may have happened when she was a child, but the memories seemed imprinted on her mind even that day. Clear as sunshine. She had never been able to process them. Learnings which came at the time when there was nothing that tickled her nerves, excited her breaths. Even today she would smile all the time, laugh at the easiest jokes. She would accept the tedium of those jokes and yell,”They are so not funny”. But even then, her mouth would be stretched out, eyes cringed shut, and the stammering voice which would be ashamed of why her face was laughing so hard. She was the nerve of every party, every get-together. The energy of a cult would seem to pass through her. The crust never really tells how the core holds the whole thing together.
They had all been drinking. Champagne and Tequila. The drinks of choice. Too many rounds of confessions, a more sophsticated version of truth-dare where there would be truths alone while the only dare would be to forget these truths with the last haze gone. Adultery, blasphemy, sodomy, gluttony, but her confessions were a little different.
“I am ashamed…”, the crowd started to jeer,” it’s bad.” The crapulence of the occasion helped the voice to drown out. But there was one person intent on wanting to know the “bad”. “It’s okay, go on”. She would smile, jolt against the little ottoman she was bumming down on trying to stand. Hit at her glass, the droplets would jerk out and splatter the other guests in the littlest but she wouldn't forget to apologise for the little stunt she thought she was pulling. To stand back on her feet.
He held her by her wrist and seated her on the sofa in the corner, lucky for them, it was not occupied because of its location. The guests seemed to have a preference for the centre of the room under the Roman chandelier while the dead and worn could slide to the nooks and corners. And thus, a seclusion to the babbler.
Rubbing his cheeks with the icicle on the outside of her glass, she started to
take on a coquette.  It was most certainly the look in his eyes who pushed the trifler out. She smiled hyperbolically without realising she was stepping into a 2 minute monologue. Her voice would be lost to the world in its ‘dare’ yet in the mare’s nest, she could just declutter her mind and cry a little at no expense.
“I want someone to tell me what to eat, what to read, what to wear. Someone to tell me it’s okay to calm down when I realize I overreacted, if it is okay to fight, if it is okay to hope, okay to love, who to love, what to hate, how to live, what to believe in. I just don’t know the answers to these questions. I am afraid of feeling too much or too little. I am scared of forgetting things. People. Caring. Not caring. I am tired of wallowing to the walls. I want someone to tell me this is fair, this is not fair, someone to tell me this will pass, or I am just stuck in a whirl and could be thrown out at any time, someone to tell me this is real, not real, because really, I don’t know where I stand. I need someone to tell me where to stand where to sit, where to go…”, and she unclenched her hands while staring at her glass. It seemed as if she wanted the glass to slid from her hands and the splinters make a gash through some part of her body they would hit. May be she can finally feel it.
He dropped her to the guest room and into a cozy bed-cover. She looked like an angel with light shining out the light in the room. And he left for his house. But, she had finally found his trail to his house. She was going nowhere.
Posted by ShreyaKashyap at 1:05 AM 1 comment:

Today is the day I declare

When I decided to create,

Tried to evoke it

Which is truly spontaneous.

And those hot springs.

When I decided to sow

A garden to turn up around me.

And why not when I know

No matter how much I push

It won't lift a leaf in the air.

Such is the power of love.

I feel the charcoal and tar

Something which is burning

So when one burns,

I don't miss the pains.

A sheet of paper

Where I am made of

And none stick together.

I feel the discrete insides

Of me stitched together.

Of a jigsaw puzzle

So today I give it up

In the name of love,

For I owe it that much.

Finally, today is the day

I declare my bankruptcy.

Posted by ShreyaKashyap at 2:55 AM No comments:

Talk about you, or

You will find a chord

A story of the phoenix

Which rises from ashes.

The hullabaloo of drama

So it does after

The tale of yours

So it does differ,

To come up from flames

Burn you all up,

Yet you are game.

The torment the tease

Soul with such vim.

To Win or not, it

Rise on you mate

Not Phoenix so reverent,

Because when you do

You need no precedent.

Posted by ShreyaKashyap at 12:34 AM 2 comments:

The guilt hangs around

Sometimes in those nights

An albatross around the neck,

The guilt starts to

The elements of doubts

Raise the hairs on arms.

But the chills are

Sent down the spine,

Asks me for a conciliation.

No dearth of words

But too little to offer,

The child needs wisdom from peer,

A rejoinder thrown across.

"Let the night be spent,

May it fold in

A morning may shine upon

Posted by ShreyaKashyap at 8:47 PM No comments:

How to remain stoic

Or smirked the least.

Stoical or not, learn

Stare at the hustle

Pray at the end

A beacon who holds

While you wade through

And sling along the mud,

And you walk the stride 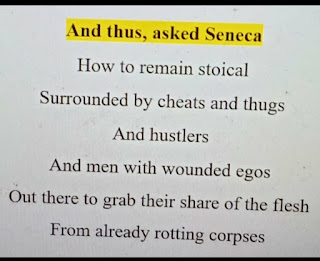 Posted by ShreyaKashyap at 11:20 PM No comments:

Never without a smile

Do you feel that lingering pierce

For it sinks me

And loses me awhile.

By my heart when it was

Thrown out of its cavity.

But never leaves my side.

It charms to see

A sinking ship infront of eyes.

The gush by then has reached

Deepest beyond my senses.

And all I could was blow

Out a whimper. Probably

But not without a smile.

Do you feel the same too? 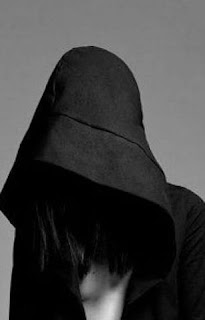 Posted by ShreyaKashyap at 10:33 PM No comments:

Edge of the World

It all started with the chats and messages the lesser tools the millenials use. I guess I needed to stick with the conventional side of my personality. I so adjust! He seemed like an  agreeable guy. But how much can you trust a guy behind a screen, and a guy after all! The chats continued. The wallpaper in my room was discoloring on its own. My pen and paper were also kind of tired and they asked for vacation. So, I had nothing to engage with. The daily stare-fights with my laptop in the lockdown had long exceeded the quota to keep me restrained. So what if they paid for my lifestyle!


We lived in the same town, not too big to be called a city. But it had fascinating topography. Amidst the plains which bore the harvest for the whole state lay the shallow mountains which rose out of nowhere. It felt formidable because of its expanse. They say in the ancient times the quarry was the source of lavish livelihood and that had cleaved the mountains in the thing of beauty it was today. Ironical, I guess! Sharp cuts here, turrets-like bulge there. And the most exquisite was the inadvertent narrow jutting, shaped like a bench in the open air, from the west end of the mountain towards the centre of the mound. I think the nature equally contributed to the chiseled architecture.

Anyways, I digressed. The chats were uninteresting, trite and hackneyed. But he seemed quite amused and confident with what he typed. I gave him the benefit, for the doubt had already crept in and was sounding hooters. Still, eh!
So, when the chats and messages made their famous segue into the "next phase" of meet-and-greet, I was deeply flummoxed. For it was nowhere near my notion of meet-cute. A girl can only dream about such things, reality is nothing like the movies of Dev Anand, Rajesh Khanna.

But the idea that the meet could in itself be a rebellion in the days of lockdown, a break from the mundane, I found myself peering at the faint silhouettes of freedom, serenity at distance. I knew I had to power through.

The meet was planned for the same day... It was cloudy, anytime the sky could break loose and I wished the stones could be our lightning rods. I took my bag rummaged through my kitchen drawer for whatever snacks I could find and stuffed them into. I had the privilege of car without chauffeur and I offered to pick him up. I think it was a nice gesture and I should be shown some gratitude, but whatever!

So, we reached the Kalapatthar or how the area was known as. The rock-cuts all across the canyon mound were not as stable as they seemed. And they were not necessarily carved for a trot. But the destination was worthwhile. He was little dreary all the way, so I kept checking in on him. I knew the destination would suck off all the weariness like a serpent bites off snake poison. Also he didn't resist. He was so at ease at last. Our masks were off. Hung around our necks like our necks needed protection. We sat along the rock formation. It had ample space for both of us. It felt good to share the place with someone. I could finally talk of how fluttery it would make me feel everytime I went there in the past.

Like before,I  lost track of time.  The clouds were making faces, jumping, even sauntering off at times, who wouldn't want to get lost!  By that time, he had moved in closely and adjusted his seat. Didn't even put in much effort to obscure it or maybe I read it quickly. The next moment his lips were clasped along mine. The thought that came to my mind was "okay, so corona is a thing of past and the consent didn't not require signing any kind of undertaking anymore". I took the new learnings to heart. Few seconds in, my body retreated. But I was excited. Finally I had the chance to do what I had wanted for a long time. I grabbed his hand, and we flew down. 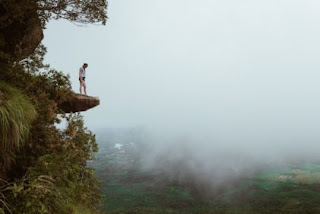 Thanks to Cole Patrick on Unsplash

Posted by ShreyaKashyap at 1:15 AM 2 comments: